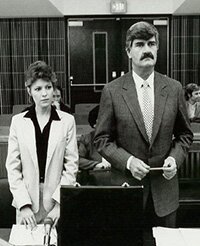 “Rainy Day Friends means what it says. These days of doom and gloom require steadfast friends, and here they are.”
— New York Post

Sometimes something ignites a spark in the human spirit. That’s the way it happens for handsome, hot-tempered Neekos Valdez and tough ex-fighter pilot Smiling Jack Marti. Confined to a large Los Angeles Hospital as a ward of the city, Neekos denies his illness and generally disrupts the Hospital routine. He escapes to the streets to face life alone… sick, hunted, and haunted, trusting no one, not even his family. Smiling Jack, a fellow patient, comes to his rescue. An unlikely friendship develops, and these two warriors, one a War Hero, one a bad-ass kid from the streets, unite forces to defeat both their illness and an uncaring system. Straightforward and refreshing, this independent classic offers a rare and extraordinary glimpse of the struggle for life and self.

Chris takes the viewer on his personal journey, his quasi-documenting of the era’s zeitgeist, including interviews with real Psychics, Scientists, Astronauts, Moonwalkers, fire-walkers, Kirlian Photographers, wiccans, and a “ghost” that lives in a barn. Slowly, piece by piece, shot by shot, he discovers mirror images of his own sensation-ravaged soul, and begins to patch himself together again as a feeling, thinking human being.

With main performances by a talented cast of regional actors, The Pyramid has a freshness of young faces that was a hallmark of 70’s era flix. Combined with the aforementioned real movers and shakers in the “Consciousness Movement” and the contributions of major musical talents providing the film’s score, the cast and crew of The Pyramid remind you of why the l970’s were the last great gasp of the Independent movie as “Art Form.”

Music by: Vaughn Meador, Karen Brooks, Douglas Dillard, and John Hartford Closing song and orchestration by Solomon Burke, called by Newsweek “The King of Soul,” and by Time Magazine “a spirit in the wind; so long as we breathe he will be alive in all soul singers.”

“A lyrical mood piece, a breaking away from cinema monsters, The Pyramid warns us that we are stalked night and day by real monsters at work inside our own psyches”
— Dave Coleman, BijouFlix

“The type of urgently feel-good film Hollywood can only dream of making.”
— Carl Schroeder, The Boston Globe